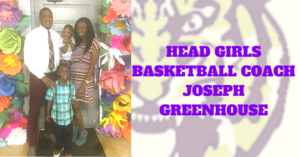 Congratulations to Coach Joseph Greenhouse on being named our Head Girls Basketball Coach. Joseph is a 2006 Graduate of Marksville High School where he played on two top 28 teams (04-05, 05-06) and also finished as a state runner up in 04-05. He was a 2004-2005 Honorable All District Player and a 1st Team All District Player in 2006 and he was also named the Team Defensive MVP that season. He played 4 years at William Penn University (NAIA) and graduated in 2010 with a business degree. His coaching resume includes 1 year as the Head Basketball Coach at Avoyelles High School and 3 seasons at Marksville High School as a Boys Assistant. He resides in Marksville with his Wife, Lucinda and 2 Sons (Joseph Jr. and Landon). We could not be more excited to have Coach Greenhouse aboard.